Just came across this from the

ontd_political community and thought I would post it here.

"The fact that this sea creature looks exactly like a rock with guts is not even the weirdest thing about it. It’s also completely immobile like a rock — it eats by sucking in water and filtering out microorganisms — and its clear blood mysteriously secretes a rare mineral called vanadium. Also, it’s born male, becomes hermaphroditic at puberty, and reproduces by tossing clouds of sperm and eggs into the surrounding water and hoping they knock together. Nature, you are CRAZY."

Tropical hawkmoths have redefined what constitutes a multi-purpose tool. A recent study has shown that several species can rasp their genitals against their abdomens to beam loud ultrasound signals at approaching bats, with this suggested as a possible weapon used to throw the hunters off course...

Interestingly this may be an example of convergent evolution as tigermoths make the very similar bat-jamming sounds but using their thorax instead. 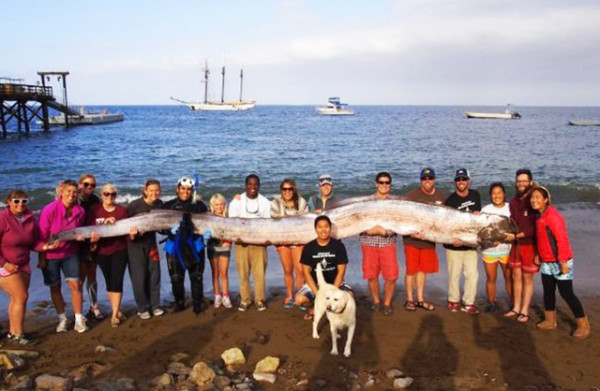 LOS ANGELES —A marine science instructor snorkeling off the Southern California coast spotted something out of a fantasy novel: a silvery, 18-foot-long, serpent-like sea creature.

Jasmine Santana of the Catalina Island Marine Institute needed more than 15 helpers to drag the giant animal with eyes the size of half dollars to shore on Sunday.

The creature, identified as an oarfish, was already dead when Santana found it, but staffers at the institute are calling it the discovery of a lifetime. The Pacific blackdragon is a deep sea fish, that can be found up to depths of up to 3,300 ft. Female blackdragons are about two feet long and have fang like teeth and a long chin whisker. They are black on the outside, aswell as on the inside to prevent light from swallowed bio-luminescent prey shining out. The males are small, about three inches in length, and brownish in color. They have no teeth, no chin barbel and no stomach. Unable to eat, the male lives only long enough to mate.

Predictably, the colour and fringes are part of a courtship display, where the equally decorative male attempts to impress the female with the size and colour of his legwarmers.

Quite sought after by photographers. See here for the private hell the photographer Paul went through, trying to get some of his shots.

"When I first saw a sea sapphire I thought I was hallucinating. The day had been anything but normal, but this part will always stand out. I’d spent the afternoon on a small dingy off the coast of Durban, South Africa. It was muggy, and I’d been working for hours–-throwing a small net out, and pulling in tiny hauls of plankton that I’d then collect in jars. As I looked through one jar, the boat rocking up and down, I saw for an instant a bright blue flash. Gone. Then again in a different place. An incredible shade of blue. Maybe I’d been in the sun too long? Maybe I was seeing things? It wasn’t until I got back to the lab that I discovered the true beauty and mystery of these radiant flashes."

The females are parasitic upon salps. The males are invisible - with the exception of when they flash like gemstones

When they’re abundant near the water’s surface the sea shimmers like diamonds falling from the sky. Japanese fisherman of old had a name for this kind of water, “tama-mizu”, jeweled water.

A genetic investigation into the illegal trade of sailfin dragons has unearthed a surprise: a new species of the rainbow-colored lizards that resemble small dinosaurs. The finding highlights just how little is known about these mysterious and threatened animals.

Sailfin lizards (genus Hydrosaurus) look like they were pulled from a child’s coloring book. As the water-loving reptiles mature, their faces, dorsal crests, and saillike tails shift from a drab green and gray to vibrant shades of neon purple, cyan, and harlequin. That’s made them a popular target for an illegal pet trade which—along with destruction of their habitat in the Philippines, eastern Indonesia, and New Guinea—has decimated their numbers. In the wild, only juveniles remain in most populations, says Cameron Siler, the curator of herpetology at the University of Oklahoma, Norman.

Atopodentatus Will Blow Your Mind
Collapse