"Beware: exploding lungs" is not a sign one would expect to see at a wind farm. But a new study suggests this is the main reason bats die in large numbers around wind turbines.

My grandparents sent me a chain letter about "fire rainbows," which I'd never heard of: 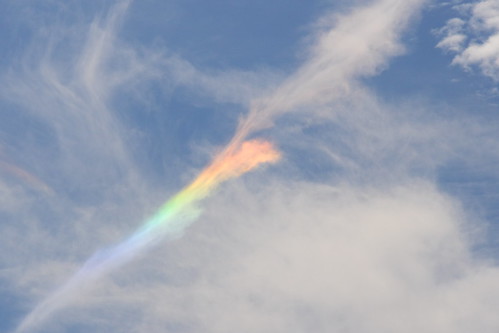 "A circumhorizontal arc or circumhorizon arc (CHA), also known as a fire rainbow, is a halo or an optical phenomenon similar in appearance to a horizontal rainbow, but in contrast caused by the refraction of light through the ice crystals in cirrus clouds.

It occurs only when the sun is high in the sky, at least 58° above the horizon, and can only occur in the presences of cirrus clouds. It can thus not be observed at locations north of 55°N or south of 55°S, except occasionally at higher latitudes from mountains.[1]

To be visible the sun must be at an elevation of 57.8° (90 -32.2°) or more and if cloud conditions are right it is seen along the horizon on the same side of the sky as the sun. It reaches its maximum intensity at a sun elevation of 67.9° .

The phenomenon is quite rare because the ice crystals must be aligned horizontally to refract the high sun. The arc is formed as light rays enter the horizontally-oriented flat hexagonal crystals through a vertical side face and exit through the horizontal bottom face. It is the 90° inclination that produces the well-separated rainbow-like colours and, if the crystal alignment is just right, makes the entire cirrus cloud shine like a flaming rainbow."
Collapse