Fathead (genus Psychrolutes) trawled during the NORFANZ expedition at a depth between 1013 m and 1340 m, on the Norfolk Ridge, north-west of New Zealand, June 2003. The scientists and crew on board the RV Tangaroa affectionately called this fish 'Mr Blobby'. Note the parasitic copepod on Mr Blobby's mouth.

here are some other fish from that genus:

not much information on these other than that they feed on sea pens, crabs and mollusks.

26 dead, 297 injured and two left traumatised. Matt Clarke takes a look at 19 painful incidents involving fish from the depths of the news archives..."

"We've scoured the Practical Fishkeeping news archives to dredge up some of the weird and terrifying incidents involving fish that we've covered in the past few years..."

And going through the list, none of the incidents involved sharks. 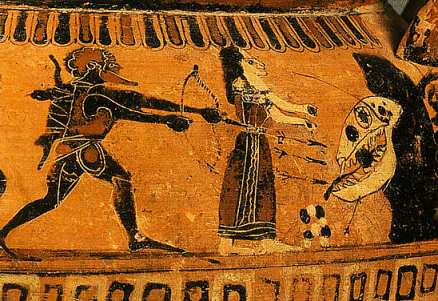 First off, I'd like to thank everyone who contributed to the Montauk Monster identification last week. High resolution photos were finally released, clearly showing raccoon paws. Congratulations if you correctly IDed the beast as a raccoon.

The response was incredible, and several new and plausible theories were brought forward, so this week, the Dapper Cadaver Blog would like to invite you to help unravel one of the most ancient monster mysteries in history - The Monster of Troy. Depicted on a Greek vase circa 560-540 BC, a huge, ghastly skull is seen emerging from a cliff as the heroes shot it with arrows. Its unusual in that most monsters of the Greeks are shown alive, enacting myths. This may be an actual record of a monster skull, a fossil skull, be unearthed, and I believe in good enough detail to positively ID the beast.

Important to note is that the Monster of Troy is sometimes described as a land monster, and sometimes as a sea monster, so we can't rule either out. It's known that the Greeks unearthed many ice age mammal skeletons, but the open boney ring around the eye, called scleral ossicles are only found in birds, dinosaurs, and reptiles, and the open sinus in front of the eye suggests a dinosaur or bird.

Paleontologists have suggested some of the following possibilities
Prehistoric Giraffes

Giraffes do have forward facing teeth and thick jaw bones. However, they don't have open sinuses or scleral ossicles, and they do have horns, which a monster artist would have included. 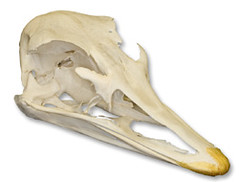 Aside from the scleral ossicles, which are so delicate they're rarely preserved, I don't see how anyone could mistake an ostrich for the monster of Troy.

This is a pretty good sea monster. It's huge, has forward facing teeth, and an open sinus. However, no scleral ossicles because no mammal has the bony eye ring.

Click here to see the rest of the suspects

And be sure to post a comment if you think you can help solve this ancient mystery.