These little guys are absolutely hilarious. I checked the tags & obviously couldn't find them; I'm really surprised that they haven't been posted before.

More on the apparently popular subject of insect sex, while googling around I found this reference to the mating rituals of dance flies.

This picture of a dance fly (also called a 'balloon fly' or a 'dagger fly') carrying a mating gift was taken by an amateur naturalist who sent it here to ask what the heck it was doing. It is a dipteran, an Empididae, and as part of their mating rituals the males capture a meal and wrap it up in silk for the females (how nice!). Then they swarm around and check each other out, and there is some speculation as to whether bigger is better or not when it comes to the silk-wrapped gift -- the bigger your gift, the better your chances of attracting a female at a distance, but also the more inhibited your mating dance is going to be as you haul the bigger balloon around.

And the kicker: some cheap flies don't even bother getting a gift, but just weave up an empty silk bubble and pass it off, the female none the wiser. Just goes to show the 'dirtbag' gene goes back pretty far in the food chain!

More from the ( Collapse ) 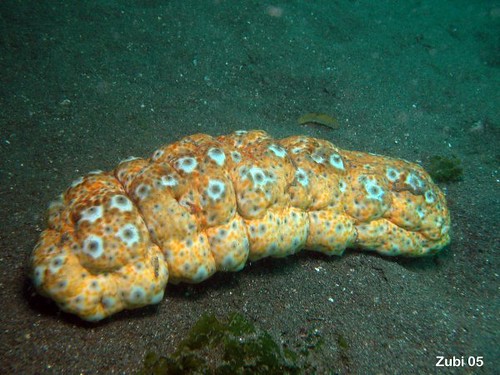 As part of Dapper Cadaver's ongoing Monster Monday's project today I bring you the most horrible thing Switzerland has ever produced, the Butatsch Ah ILgs.


The Butatsch is a great and terrifying amorphous blob, like a swollen stomach, but covered with leering eyes that can shoot fire. The Butatsch lived at the bottoms of lakes, at the gateways between earth and hellish neitherworlds. The fire from its eyes was the very same as the hellfire of eternal damnation.


For I think obvious reasons, no fishermen would fish in the waters where the Butatsch was said to dwell, but the beast was so feared that no shepherd would allow there sheep to graze on any hillside facing his infernal lake.


Since no Butatsch has ever been photographed, the part of the Butatsch is being played by a Stichopus Sea Cucumber.

hey. i'm new.
someone over at found objects told me i should post this here for some insight. =D
so is this normal?