The story of John Wayne Bobbitt holds no fear in the earwig world. These well-endowed insects have a standby penis to compensate for accidents in action, Japanese research now shows.

Male earwigs, like a few other well-prepared animals, carry a spare set of genitals. The earwig's auxiliary organ was thought to be impotent, as it points the wrong way and females have only one hole.

To probe the workings of the extra appendage, Yoshitaka Kamimura and Yoh Matsuo of Tokyo Metropolitan University studied the earwig Euborellia plebeja. The male of this species is blessed with a pair of penises that are often longer than its body. Kamimura and Matsuo interrupted the earwigs in the act by pinching them on the behind.

Imagine having a pair of penises longer than yourself :V SCORE.

Also earwigs actually do have wings :V I don't think a lot of people realise. It always intrigued me that they have to fold them up so many times in order to get them to fit into the wing cases.

An article on earwig wingies. 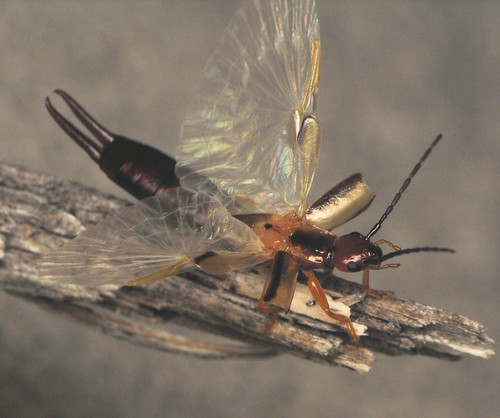 And finally, ever wondered if you've found a male or female earwig? The easiest way to tell is the pincers. Straight pincers belong to females, curved to males.
( Collapse )
Collapse