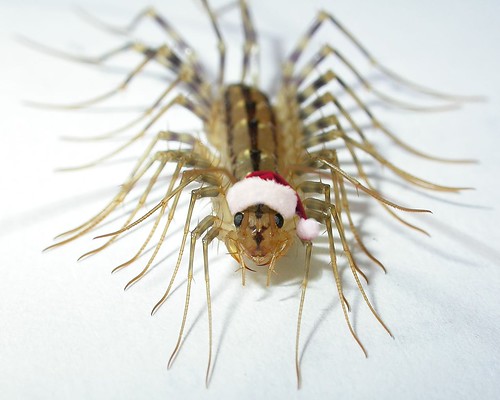 Originally posted to my ugly comm, cuz it was but kinda cute with the added hat, someone suggested I post it to

lolinverts which started the confusion. I had thought it a centipede or millipede but they're convinced it's not.

Someone even suggested a photoshopped cricket.

I've seen a bug like this before but I'll be damned if I can remember the name.

First post, and all that jazz.  Have checked the archives, think this is new.

The cuter, fluffier variety of hymenoptera excluding unfortunate mentions of African-hyrbids, bees are defined in their phylogeny as eusocial wasps that gave up on the idea of eating meat, and moved onto a more vegan, laid-back lifestyle of pollen protein sources. So we see them buzzing from flower to flower, pollinating, sipping nectar, and generally acting as one of the darlings of the insect world.

It seems that in a few species of Trigona stingless bees, there have been some second thoughts about this lifestyle. First reported by Roubik (1982), in Trigona hypogea Silvestri, a few species of these bees display obligate necrophagy (Necrophagy – consumption of animal tissue killed by something other than your own conspecifics. Less creepily known as scavenging).

Crack open the underground nest of a colony of these tropical bees, and you’ll find something that resembles a bumblebee nest, with storage cells for nectar and protein (picture T.carbonaria, as the internet is woefully lacking visual aids for the right bee). With T.hypogea, the source of this protein is near-exclusively dead animals – although more recent work has recorded them taking wasp larvae.

Once a fresh corpse is located by foragers, a scent trail is deposited between the hive and the body, triggering massive recruitment to the area. Workers will protect their new course of food, driving away flies, wasps, and anything else foolish enough to try to feed on that particular corpse. Now, storing meat is much harder than storing pollen, so to avoid wax pots of festering flesh in a colony, the bees consume tissue at the foraging site and metabolise it into a protein-rich, glandular secretion which can then be stored, mixed with honey, and used to feed the larvae.