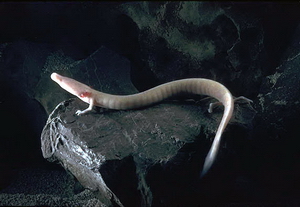 Meet the Olm! (Also known as the Proteus.)

This neat little amphibian lives completely in water, unlike many of his brethren. He lives in eastern Europe. Sort of like axolotls, he stays pretty immature looking with his lovely feathery gills.

They have no eyes. The eyes develop as larvae, but then don't get used since they primarily live in underground caves. So eventually, they atrophy and recess back into the skull. (There is a subspecies with a more developed set of eyes in their older ages though.)

Coolest thing? These little guys can live up to ten years without food.

Source for you
Collapse