sorry if this is a repost, i looked through the tags and I didn't see this.

"Japanese fishers have found an unusual bottlenose dolphin with an extra set of fins that could be an evolutionary throwback to the time when the marine mammals' ancient ancestors walked on land."

"The dolphin was captured alive off the southwestern coast of Japan on October 28. It was then shipped to the nearby Taiji Whaling Museum for study (map of Japan).

While environmentalists decry the town of Taiji's annual practice of dolphin fishing and capture, this particular catch appears to be a genuine scientific find.

'This is an unprecedented discovery,' Seiji Osumi of Tokyo's Institute of Cetacean Research said in a weekend press conference.

'I believe the fins may be remains from a time when dolphins' ancient ancestors lived on land,' Osumi told reporters.

Scott Baker, associate director of the marine mammal program at Oregon State University in Corvallis, agreed, saying that 'this certainly is direct evidence of evolution.'

Dolphins normally have two fins that are structurally similar to other mammals' arms or front legs. But the recently discovered dolphin also has a pair of stubbier, symmetrical fins near its tail.

'This is what you would call an atavistic trait'—a genetic trait that appears to be an evolutionary throwback—Baker told National Geographic News.

The dolphin's extra fins are 'an ancestral characteristic that has reemerged for some reason,' Baker said.

'Humans occasionally are born with excessive hair—the so-called werewolf gene—so we look more like our ancestral form shared with apes.' \
All human embryos also go through a stage in which they have tails that are later absorbed. But sometimes a person is born with an actual tail.

Similarly, dolphin embryos pass through a stage in which they have hind limbs that disappear as the embryo develops.

The recently captured dolphin developed an extra set of flippers from these limbs that are about the size of human hands.

It is unclear whether the dolphin would actually make use of its spare fins for maneuvering, Katsuki Hayashi, director of the Japanese whaling museum, told the Associated Press.

It has long been believed that dolphins are descended from land animals that took to the water.

Initial genetic studies have provided evidence that the marine mammals are most closely related to hippopotamuses.

And early last year paleontologists from California, France, and Chad reported fossil evidence that dolphins, whales, and hippos diverged from a common ancestor that likely lived about 50 to 60 million years ago.

The four-finned dolphin, now swimming in an aquarium tank in Taiji, will require considerably more study before scientists can determine what it reveals about dolphins' evolutionary history.

'There's not much science yet,' Baker said. 'It's an interesting finding, and I think the interpretation that it is consistent with our expectations from evolution is true. [But] that's as far as it can go at the moment.'

Japanese scientists have announced that the dolphin will be kept at the Taiji Whaling Museum for x-rays and DNA tests."

a close up to the hind fins

dolphin embryos (the legs are in the green circles)

cant see hind fins here but this picture is freakin sweet (also it looks like a dolphin, unlike above. embryos tend to looks like blobs sometimes and this helped me connect the blobs to dolphins) 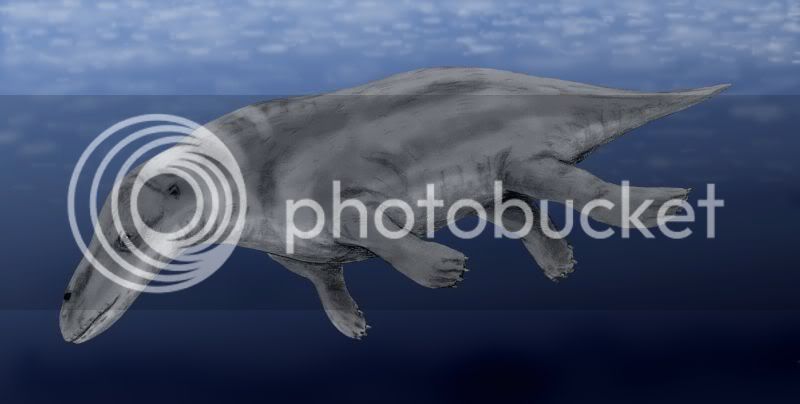